Ago to the Elections

Development and Support of Afghan Women and Children Organization (DSAWCO) initiated a project under name of “Campaign for Collecting One Million Signature for Implementation of Prevention Law of Violence against Women and Punishment of its Perpetrators” with financial support of National Endowment for Democracy (NED) from 2012 until now which covers all provinces of Afghanistan.

These signatures are taken from offices such us Provincial Council, Governor’s Office, Representative of Independent Human Rights Commission, Representative of Justice and Security Departments, Civil Societies including Civil Society & Human Rights Network, all local organization, Development Unions, Public Unions, and all Governmental and Non-Governmental Organizations and especially from common people.

After performing campaign in every province, our team along with formation of advocacy groups that are made civil activists will initiate their task. These advocacy groups will look into violence against women files and cases in provinces and assist legally to the victims of violence.

This time the campaign was performed successfully in farah province and was welcomed by people and officials of the province. The organization is feeling responsible regarding advocacy in this province and will continue cooperation until and after execution of the project. 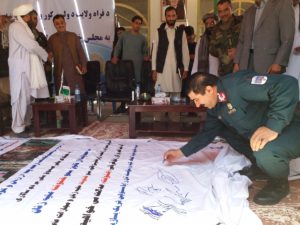 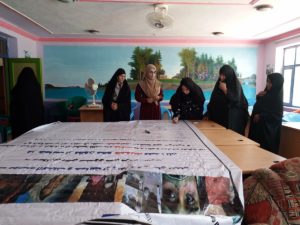 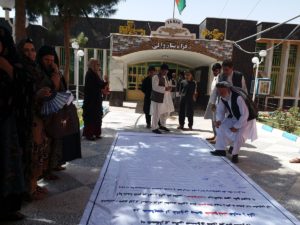 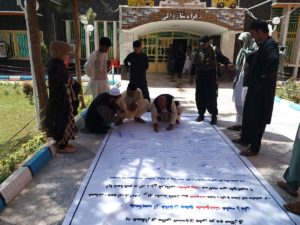